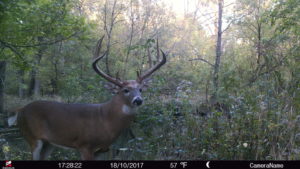 The debate rages on among some deer hunters about whether coyotes are a threat to deer and whether having coyotes on a property has a negative impact on the deer hunting there. When it comes to all things whitetail I always try to keep an open mind and not jump to conclusions. It is the difference between being a sharp student or an ignorant know-it-all. The issue of coyotes vs deer is one that has taken me a long time to settle in on an opinion. I have had some experiences this season that have solidly tipped the scales and my opinion of coyotes and deer now is pretty solid.

My good friend Henry and I often have a friendly debate about coyotes. For whatever strange reason Henry seems to like coyotes so like a lot of other topics I have long used every possible angle to pull his chain. He has thrown out some arguments regarding coyotes that I have heard elsewhere as well. He claims that the places that have the most coyotes also have the most other game and thus the reason the coyotes are there. He also claims that coyotes only kill the sick and weak and are actually beneficial to game populations.

Personally I have not been so sure about coyotes and their impact on deer as is my buddy Henry. I haven’t been willing or ready to blame coyotes for any of the woes that may come to my beloved whitetails but I have long wondered what impact they have on whitetails and specifically the quality of deer hunting on a property. Again, I have tried to keep an open mind because one only learns when one is willing to look closely at both sides of an issue and peel back the rhetoric, propaganda and false information to reveal the truth.

Experiences this hunting season have finally fully convinced me that coyotes are not simply opportunistic killers but are a real threat to healthy deer and can certainly wreak havoc on a good deer hunting property. Let me share just some of these experiences. 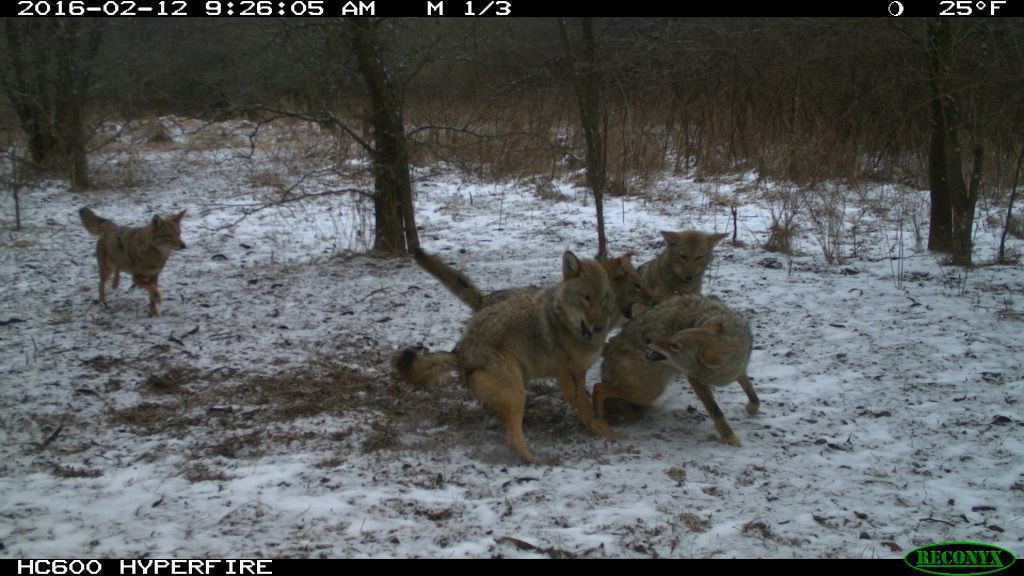 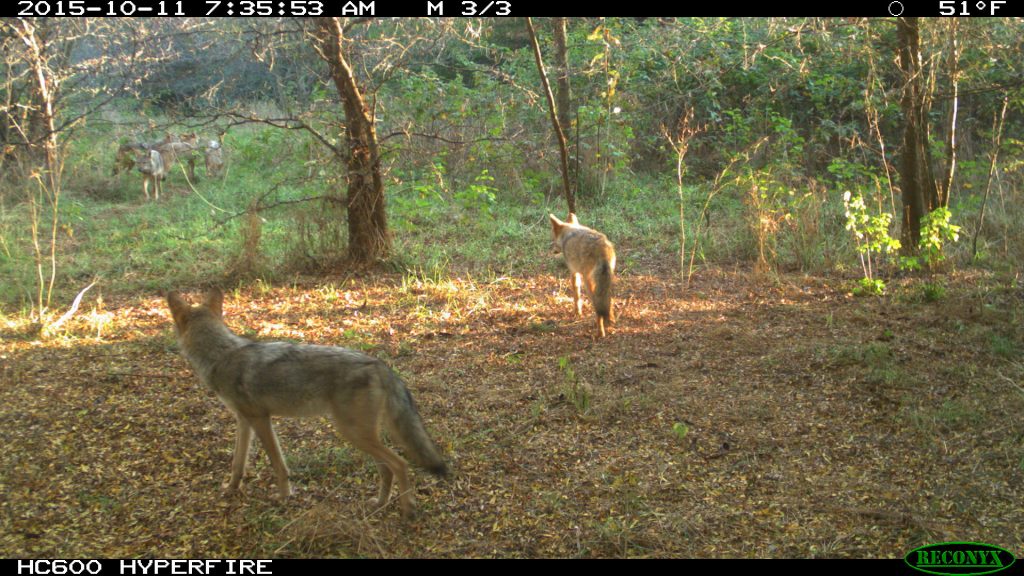 When you have this many coyotes in a single photo it is hard telling how many more are on the property and the quality of your deer hunting is bound to suffer.

In this first example I have hunted a particular property for many years. It is fantastic habitat and there are always deer there. The thing is however, for the past several years the property has lacked a deer herd to match the quality of the habitat and food available there. The does that live on the property rarely have two fawns accompanying them by fall and often have no fawns whatsoever.

Years ago when the deer hunting was great on this property I would occasionally see a coyote or two but it was not a common occurrence. Today the habitat is much improved on this property but my game cameras reveal about as many coyote photos as they do deer pics. In fact it is not at all uncommon to get photos with 3 or 4 coyotes in them. The evidence has become way too much for me to ignore; coyotes in this area have made this property their home and in the process have had a very noticeable negative impact on the deer hunting. What’s more, I know of another similar property in another county several miles away where the very same thing has happened. Coyotes have pretty much ruined the deer hunting on these properties.

I have greatly expanded my game camera arsenal over the past couple of seasons and now look at close to a million game camera photos a year from my cameras. As would be expected, I get a few weird and interesting photos every year. What I also get is a number of photos of healthy deer running past the camera and seconds later a coyote running past in the same direction, obviously chasing the deer. How much more evidence does one need? 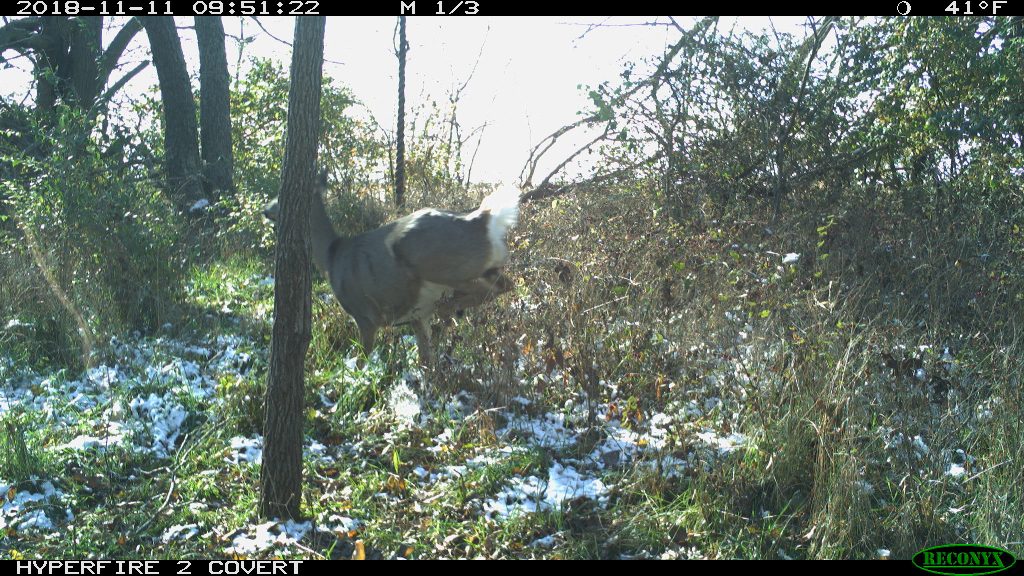 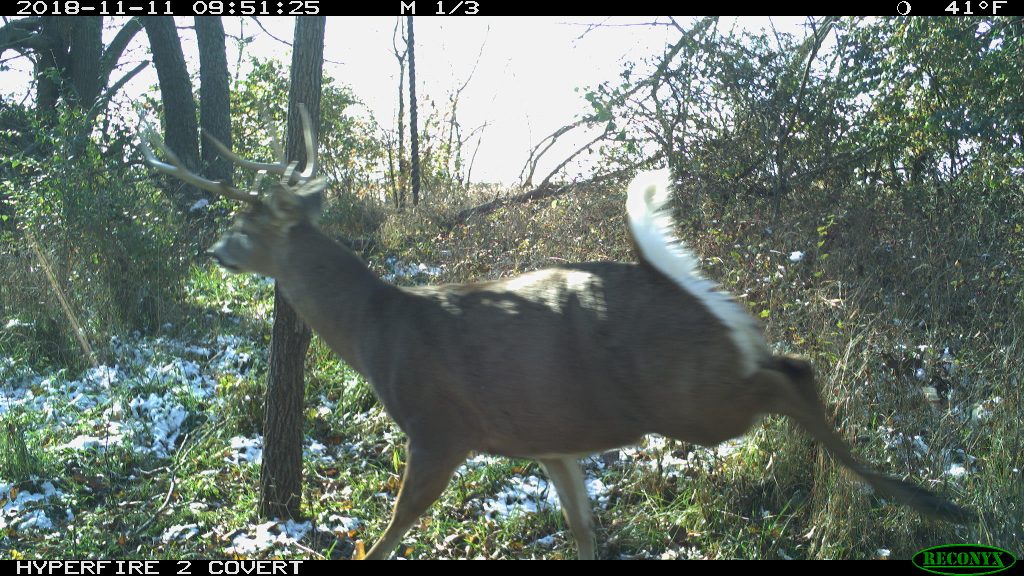 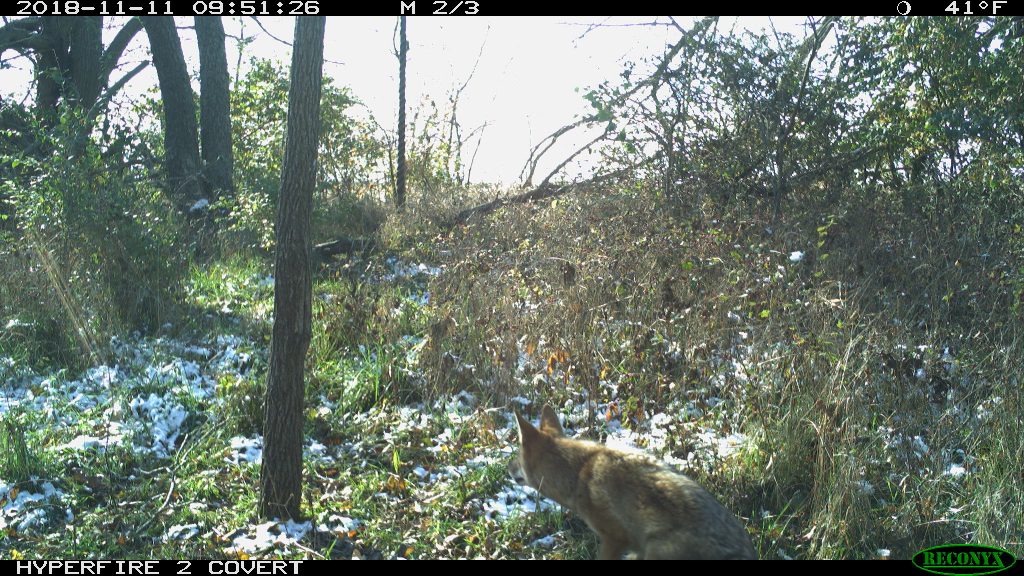 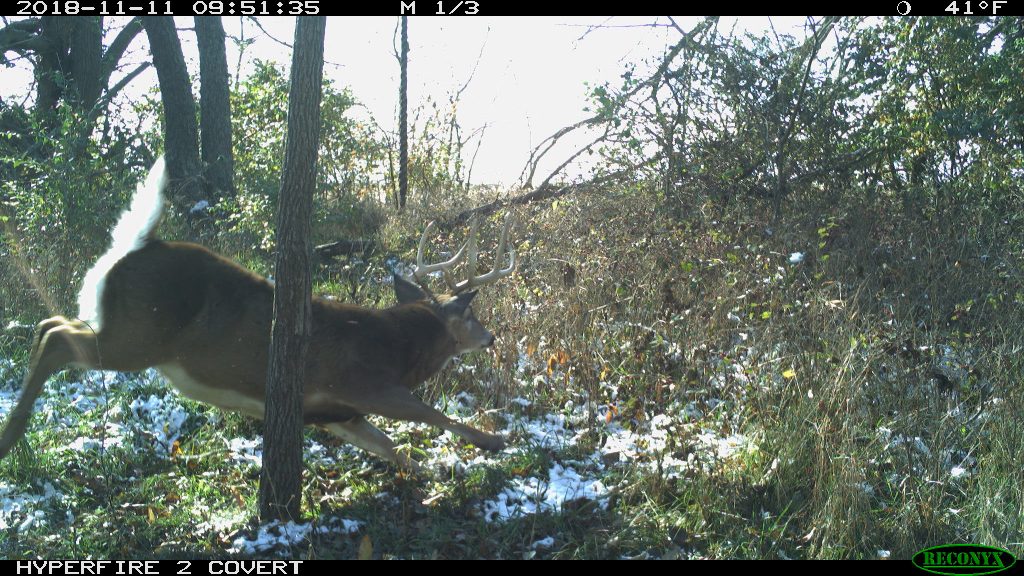 This set of photos tells the true story. First a doe runs past the camera, then 3 seconds later a nice buck runs past, then 1 second later a coyote. Clearly this coyote was right on the heels of two healthy adult deer. This was just a single coyote so imagine the impact a pack of them could have on a property.

Several years ago I started getting a lot of coyote photos on my own property. It got to the point that I called in a very good coyote trapper. In about 3 weeks he caught 14 coyotes on a small portion of my 120 acres. This was in spite of the fact that I limited where he could go because I was deer hunting the property as well. That fall I also shot 3 coyotes with my bow on the property. That is 17 coyotes from 120 acres! The quality of the deer hunting was slipping when all of the coyotes showed up but we got things under control that one fall and since then the coyote population has remained at a manageable level and the deer hunting has improved.

Don’t get me wrong, I have always killed every coyote I possibly could. I also knew coyotes affected deer to a certain degree, occasionally killing one. What I have come to realize is that coyotes are a lot harder on deer and have a bigger negative impact on deer hunting than I once thought. Without a doubt, managing a property for quality deer hunting requires dealing with the coyotes in some way. Ignore the problem and it will just get worse.