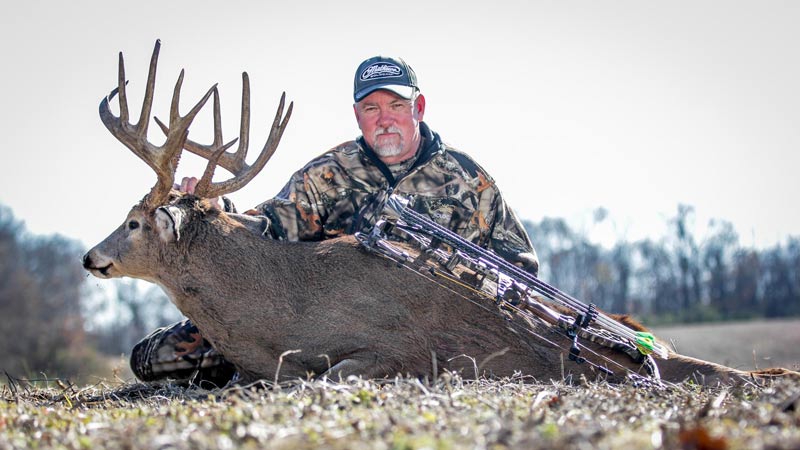 Now that hunting season is over for another year, what are you going to do right now to get ready for next season? For those who are serious about tagging mature bucks year after year there is no “off season”. Literally every week of the year we are doing something to help us increase our odds of success when the time comes once again to grab our bows and head to the woods.

My preparation for “next year” actually started right after I shot my buck on November 8th. My 2015 buck score a fraction under 180″ and was 6 years old. I actually started keeping tabs on the buck in 2011 and got his photo on my trail cameras for the last 5 summers. I spent all of that time putting together the pieces of the puzzle and when the time was right, I went in and killed him on the very first day I ever hunted for him. It was the second year in a row that I targeted a buck and then killed him on the very first hunt. By the way, neither of these bucks were killed on my own land or on leased property; They were as “real world” as it gets, proving what is possible for anyone. Dont make excuses because you think someone else has a better place to hunt, instead get out and get it done. This kind of success doesn’t happen by accident but only happens after years of work, effort and study tells me “where” I need to be to kill him and “when” I need to be there.

I am going to use this blog in 2016 to share with other whitetail fanatics just what I am doing at every point in the year to put myself in a position to kill a big mature whitetail once hunting season opens. Hopefully there will be some tid-bit of information that you might use to help you succeed at some point down the road.

So what am I doing right now to help me kill a buck next fall? As noted, I started searching for a buck to target next season as soon as I shot my buck back in November. I almost never fill my second Illinois buck tag as I am always afraid that if I did, I would find a giant buck and not be able to hunt him. Instead, once I fill my first buck tag I am then hunting more for a buck to hunt next year than for one to shoot then. With that said, if I do happen to stumble upon a true giant I will certainly go after him with every intention of shooting him. That seldom happens though.

I should note that when I shot this years buck I already knew of a bigger one. So why didnt I shoot him instead, you ask? Simple, the buck I shot was 6 years old and the other one was only 4 years old. I am only hunting for true giants and a 4 year old scoring more than 180″ has the possibility of being REALLY special down the road.

During the final 2 months of the Illinois archery season I have been spending time in my stands diligently searching for new bucks to go after in the future as well as keeping tabs on the bucks that I already knew about. In the past 10 days I have laid eyes on the 180″+ 4 year old 3 times. I also know of a nice 3 year old that will push 160″ and have seen him once from a stand since the final firearms season. There are several others as well and I am tracking down some leads passed along by friends. Not only do I look for new target bucks from my treestands but also drive back roads regularly during evening hours and also rely heavily on trail cameras. Right now I have nearly 20 trail cameras in the woods in 3 counties on several different properties all with the purpose of finding bucks to hunt next season and even seasons beyond.

Besides looking for new bucks to chase, I also use this time of year to look for new hunting properties. I am continually looking for “greener pastures” and while this is something that I do all year ’round, the search intensifies at this time of year. You can never hope to kill a buck bigger than what is living on the properties you hunt. If a buck that meets your goal is not living on a property that you currently hunt, then the only hope you have of reaching your goal is to find other proeprties to hunt with hopes that a bigger buck lives there.

Shed antler season is right around the corner but this period right after hunting season closes and before the bucks shed their antlers is a time when I am diligently searching for giant bucks that survived hunting season and new hunting lands. If you find a giant buck now, the odds are very good that he will still be alive and well when hunting season opens on October 1st.