Should We Cull Yearling Bucks? 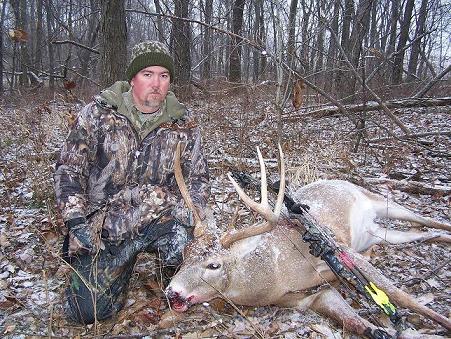 I bet the title of this article surely will fire up a boat-load of internet experts .. and that was the intent. My previous blog entry titled “Which Buck Should I Shoot?” brought them out of the woodwork and had them spewing more knowledge than one of average cerebral capacity could possibly consume and contain. I strongly suggest that you go back and read that previous blog post before you continue reading this one. It will simply help you to better understand the full story.

Back in November I watched a buck with very small spikes chasing does like he was the stud of the woods on one of the properties that I manage. The spike antlers that the buck carried were less than 2″ and yet the body size and condition of the buck told me he was not a late-born fawn from the prevous year nor was he in poor health. He was noticably bigger than the mature does he was chasing and even slightly larger of body than other yearling bucks on the property. (a photo of the buck accompanies the previous blog entry) I vowed on that day that if the buck was still alive during the late season and if I still had a buck tag in my pocket I was going to take him out of the herd.

That is exactly what happened on a recent January afternoon as the Illinois archery season wound down to its final days. As I sat in a blind over-looking a plot of Real World soybeans a group of 3 yearling bucks fed within 20 yards. Within 10 minutes they were joined by the spike whose body was clearly the biggest and rack by far the smallest of the four bucks. A well-placed arrow quickly put the spike down and I had him gutted and out of the field before the sun set.

I shot that spike buck because the odds were very slim of him ever becoming one with antlers that would score more than Boone and Crocket minimum of 170″. That is what my goal is on the Midwest properties I manage. In my previous blog I mentioned growing bucks with 200″ antlers; that is my dream, not my goal. I know very few bucks will ever approach 200″ and to manage a wild deer herd for that is a recipe for failure. I hope to get lucky someday and have a 200″+ buck on one of my properties but again, that is not the “goal”, it is the “dream”, big difference.

Several folks took exception to my shooting the spike buck while also letting another buck that is at least 8 1/2 years old walk. There were some very valid comments that I am going to address here and even expand on.

Let me start by saying that this spike yearling was the first yearling buck I have shot since 1982, a period of 34 years. I have been very outspoken AGAINST shooting yearling bucks for decades. I remain opposed to shooting yearling bucks as a matter of trying to “cull” them from the herd … 99.9% of the time. This buck is the only time in decades that I felt warranted me going against what I preach. As I noted in my previous blog, this is the smallest buck I have seen in 40 years of hunting.

Some suggested that this buck was a late born fawn from the previous year. This is a great thought and an arguement that I myself have used in the past in opposition of shooting yearlings but the body size of the buck suggested otherwise. From my own personal experience I know first-hand about late born buck fawns. About 12-15 years ago I watched a doe fawn get bred by a buck in my captive research herd on Valentines day, February 14th. She later gave birth to a single buck fawn on the last day of August. The next summer that buck grew his first rack which was about 5-6″ tall and barely sported a half-inch fork on each antler. To be clear, that buck grew his first rack before his first birthday. He was a classic example of what happens with a late born buck fawn; they grow their first rack at a severe disadvantage to other yearling bucks. This buck was also noticably smaller bodied as a yearling than the other yearlings.

The “rest of the story” of this buck is where it gets interesting. That bucks third rack scored 180″. He died before he had a chance to grow his fourth rack. I have used the tiny yearling rack from that buck along with the 180″ rack he grew as a 3 year old as visual props during seminars at QDMA events and such. My point is that you cannot tell much about a buck by his first rack … BUT … but you CAN tell a lot by looking at both the antlers and body size of a yearling buck. Had the spike buck I shot also been small of body, I would not have shot him.

If someone would have told me at the begining of last season that I would shoot a healthy yearling buck I would have told them they were nuts. I have preached against it for years and will continue to do so. The buck I shot was an anomoly. I dont expect to ever see another buck like this; again, it was the first yearling buck I have shot in 34 years. I honestly feel that I have left the deer herd on this property in better position to achive my goals than had that spike buck been allowed to live.

Now that I have firmly stated that I will not be encouraging people to cull yearling bucks, I want to throw out some more food for thought on the subject. Some of my critics have thrown out the fact that research has proven that spike antlered yearlings can become large antlered adults. I dont disagree with this at all but I would like to counter the arugument for discussions sake. For every spike buck that matures to carry a rack of Boone & Crockett size, there are hundreds if not thousands of others that dont even grow an “average” rack for bucks of their age class. Spikes are below average in antler growth as yearlings and more often than not remain that way throughout thier life. Throwing out the extremely rare example versus what is typical makes for a weak argument. Spike bucks may be common in some areas but here in the Midwest bread-basket, they are fairly rare.

Shorty Fless of the legendaryWilderness Whitetails in Wisconsin made a comment to me a few years ago regarding yearling bucks that has stuck in my mind since. For the record, Wilderness Whitetails was the first to ever grow a 300″ buck in captivity. In fact they grew the first 2 captive 300″ bucks. Shorty stated that their biggest bucks start out as above average yearlings and remain that way throughout each age class. In other words, the best yearlings will also be the biggest 2 year olds, 3 year olds, etc. Giant bucks almost never start out as below average and then one year experience a great antler explosion. To put it in human terms, 7-foot tall humans are rarely below average in heigth when they were in grade school. Genetic expression geenrally starts early.

My decision to shoot the spike buck came because I recognized that he was not a late born fawn from the previous year and the fact that I am trying to manage small properties for above average antlered bucks. These small acreage parcels are only going to hold so many bucks of each age class. I know that I can have no real impact on the genetics of a wild deer herd. However I CAN have a big impact on the bucks that are allowed to reach older age classes on these properties. I do not anticipate shooting another yearling buck in the near future however I have no regrets shooting the spike buck this season ensuring that he did not occupy a space that one of the other yearlings can occupy and become a 2 year old. As I have in the past, any culling efforts will be geared more towards shooting older bucks such as the 3 year old pictured at the top of this blog. However I reserve the right to switch gears a bit when a situation warrants it.