Supplemental Feeding and CWD in Illinois 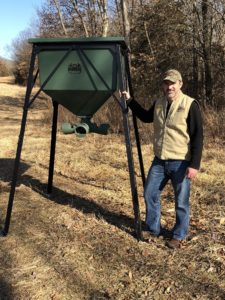 Supplemental feeding of deer was banned in Illinois several years ago when CWD was confirmed in the state. It has been long enough now that some Illinois deer hunters have bought into the idea that supplemental feeding is a bad thing. The commonly promoted theory is that when deer are concentrated at a feeding location they are more likely to spread disease within the herd. There are some big holes in this theory however and while I certainly do not claim to be an expert on CWD I bet by the end of this article there is a good chance you will have learned something you didn’t know regarding this topic and may even change your mind on the idea of supplemental feeding.

Many whitetail biologists have shifted their view on supplemental feeding in recent years and a lot of Illinois deer hunters think it is time that we rethink the supplemental feeding ban in Illinois. In fact, increasing the levels of some key nutrients in deer diets could very well make them LESS susceptible to disease.

Let’s start with the fact that deer are naturally very social animals who live in family groups and constantly groom each other and feed in very close proximity to each other. Their “communication system” has them all urinating in the same scrapes which they also will smell and/or lick. They also all commonly use a licking branch for communication where every deer in an area will lick and chew on the same branch. These natural actions by deer are surely more prone to the spread of bodily fluids than supplemental feeding.

CWD was first found in Illinois in 2002 not long after it was found in neighboring Wisconsin. Illinois immediately banned any use of feeds or minerals for wild deer within the state and began an extremely aggressive sharp-shooting campaign to eradicate deer in areas where CWD was found. At that time much less was known about CWD so this original approach to try to control the spread of the disease may not have been out of line at that time.

What many either don’t know or fail to acknowledge is that since that time millions of tax-payer dollars have been spent on these efforts in a losing cause. In fact the number of Illinois counties with confirmed cases of CWD has increased over four-fold. I will remind you that this happened while supplemental feeding was banned in Illinois and while the extensive sharp-shooting campaign was going on.

Clearly the current approach to managing CWD in Illinois is not working. CWD is spreading and will continue to spread. Is it worth it to continue to spend millions of tax-payer dollars to fight this losing battle? Many Illinois deer hunters think it is time for a different approach and many wildlife biologists agree. Recent cutting-edge science has changed the thinking of these respected professionals who once bought into the ban on supplemental feeding and the expensive eradication programs that have proven to be failures.

Today’s science has led to the development of cutting–edge nutritional products specifically for whitetail deer. These products are being used in significantly increasing volumes by captive deer breeders around the country as they witness the benefits first-hand. Many of these captive deer breeders claim to see lower incidence of disease as well as better survival rates of diseased animals.

Some opponents of supplemental feeding claim that deer can get every nutrient they need from the crops and other plants growing in fertile Illinois soils but this is simply not true. Wild deer can certainly survive in Illinois without supplemental nutrition but can they “THRIVE”? Consider this analogy –  An Illinois farmer may be able to grow corn and soybeans in his fields without any fertilizer yet essentially every ag field in Illinois gets an application of fertilizer every year. This is to supplement those nutrients which are in shortest supply and thus limit plant health and production.

Let’s consider this same analogy with an Illinois livestock farmer. A good Illinois cattle farmer will have his cattle grazing on lush pastures planted to specific grasses and legumes. He will take it a step further by fertilizing his pastures to maximize the plant production and ultimately the production of his animals. Even with his cattle grazing on the most intensively managed pastures, he will also supplement his cattle’s diet with mineral and vitamin products to keep them in the best health possible.

Ask any veterinarian and they will tell you that animal health, including “disease prevention”, always starts with nutrition. An animal whose nutritional needs are being fully met is much better able to ward off health challenges including disease. This absolutely applies to deer as well as livestock, pets or even humans.

Could an Illinois farmer grow crops without ever fertilizing his fields? Sure he could, but the resulting harvest would be much less because the plants in his fields would not get their nutritional needs met and would be much more susceptible to diseases and other stresses.

Could an Illinois cattle farmer raise cattle without supplementing their diets with minerals and other nutritional products? He certainly could but his animals would not be as healthy and would be more prone to disease issues. They would also have all sorts of other issues such as slower growth rates and more reproductive issues. 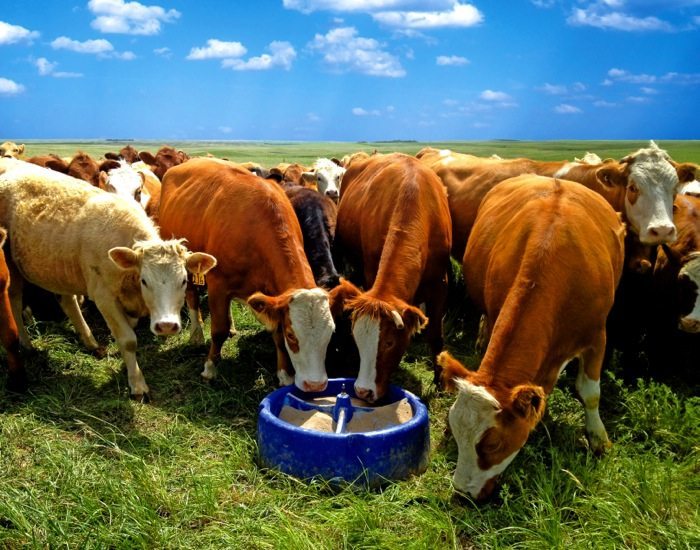 In either case the crops and cattle would “survive” but they certainly wouldn’t “thrive”. This is the very same concept with Illinois deer herd. Supplemental feeding nutrient dense products could very well make them better equipped to ward off disease threats. While the intentions may have been good with the supplemental feeding ban in Illinois, it may have actually had the opposite effect than was intended. 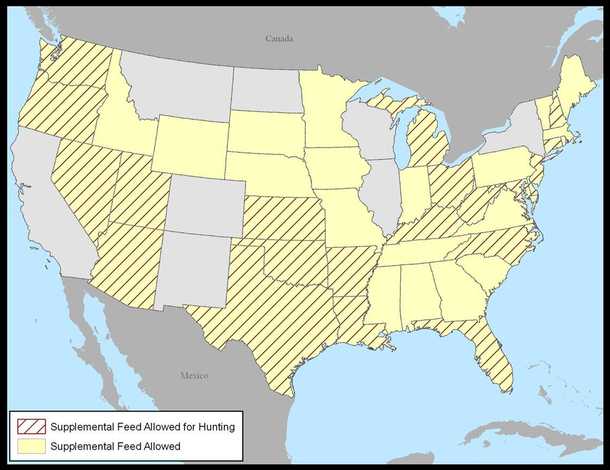 If you think that allowing supplemental feeding will destroy the Illinois deer herd, you might want to check with hunters from these states in yellow. It doesnt seem to be hurting the deer herds there!

Opponents of supplemental feeding also like to mention the “numerous studies” showing that supplemental feeding “spreads diseases”. I have yet to see a study that actually proves that a single deer contracted CWD through sharing a feeding location with other deer. Most of the “scientific studies” I have seen are little more than opinion pieces based on assumptions without the facts from actual in-field studies to back up the opinions shared.

Let me further destroy the anti-supplemental feeding position with a very interesting fact. There have been multiple situations where a captive deer was found to have CWD. Every deer on those farms was killed and submitted for CWD testing and yet not another single deer on those farms had CWD. Think about that; these deer were all confined and fed in the very same feeder every day for years and the one animal with CWD did not spread CWD to the others!

There are many factors involved in spread of disease such as susceptibility (some genotypes may be resistant), dosage of infective material, immune function of the animal and especially for CWD, incubation time.  Supplemental feeding to date has not shown any correlation with spread of CWD.

Deer hunters will often wonder why various state game agencies give so much attention to CWD when another deer disease, EHD (Epizootic Hemorrhagic Disease) kills thousands of times more deer every year than CWD ever has. To the casual observer this makes no sense at all but this is where the politics of CWD comes into play. It is the very same politics that has caused rational people to blindly follow the CWD scare without having any idea why CWD is so bad and why they should fear it.

CWD is caused by a prion which is briefly described as an infectious protein particle that causes various transmissible spongiform encephalopathies (TSEs). Mad-Cow disease is a TSE as is CWD in deer. These prions essentially eat holes in the brains of the animals they infect. In a nutshell, someone came up with the idea that CWD may at some point “jump the species barrier” and infect humans that consume the meat from a CWD infected deer. This radical idea is literally driving the whole CWD scare but it HAS NEVER HAPPENED in spite of the fact that it is estimated that every year people unknowingly consume many tons of venison from CWD infected deer.

My personal opinion regarding CWD would be a whole lot different if there was true science behind the idea that CWD could jump the species barrier and infect humans. That just simply is not the case however and as the years go by, wildlife biologists in growing numbers are seeing this as the conspiracy theory that it really is. On the other hand, some biologists have bought in so deep that they can’t reverse course. In my opinion, it makes about as much sense as killing your pet dog because you don’t want to take the chance that canine-distemper to “jump the species barrier” and infect you!

As stewards of this magnificent natural resource it is time to open our minds and look at this issue in a new light. Currently the Illinois legislature is considering senate bill SB-2493 which would make supplemental feeding of deer legal in Illinois only on private property and only outside of hunting season. This bill is still a long ways from becoming law but it really puts the issue of CWD in Illinois at a cross-roads. Do we continue to ignore facts and spend millions of tax-payer dollars on a program that is clearly not working? Or do we embrace the latest science and try a new approach, one that would not only benefit the Illinois deer herd but also benefit Illinois residents, deer hunters, farmers, business owners and even the coffers of the state of Illinois? A growing number of Illinois deer hunters believe this change is long over-due.