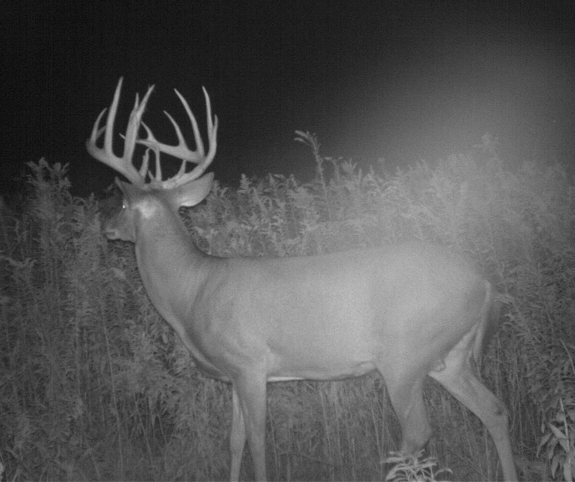 My quest to tag a 6 1/2 year old buck named Trump has proven to be quite a challenge. The story has garnered a lot of interest as I regularly get asked about “Trump” and questioned about when I will be writing my next update. Well here it is.

To quickly recap for those who have missed the earlier blogs; I started getting photos last summer of a buck that had been a regular on my summer trail cameras. In fact, the summer of 2016 was the 5th summer that I had gotten this bucks photo. It started in 2012 when he was a 2 1/2 year old. Even as a 5 1/2 year old, the buck wasnt one that caught my attention or caused me to give him any extra thought, let alone put any effort towards killing him. Then last summer when I got his first photos I realized what a mistake that had been. His antler growth had exploded and I would now be very happy to put my tag on him but I knew so little about the buck that it was going to be tough. What I did know was that he shifted his range each year in early fall. I would get dozens of photos of him each summer and then he would disappear and I would not get a single photo after about early October each. This year was no different.

What did change this year was that I did not get a single photo of Trump in daylight. He had become completly nocturnal. On October 7th I went in to hunt a stand in Trumps summer area hoping he had not yet moved to his fall/winter range. I took in a cellular trail camera with me on that hunt and placed it over a scrape that was just 20 yards from the stand I hunted. Later that evening as I was getting ready for bed my cell phone buzzed with the first photos from the camera. Yep, it was Trump. Had he showed up 4 hours sooner the story would have likely ended right there.

I had already started placing several cameras in the surrounding area in anticipation of Trumps range shift in an effort to get an idea of which direction he moves when he leaves his summer range. Little did I know that it would take almost 2 months to get another photo of him after that October 7th visit to the scrape near my stand. Throughout the rest of October and all of November I continually shifted cameras to new areas in an effort to locate Trump. I also spent considerable time hunting new properties in areas I thought he might have moved to. My efforts were futile.

I had pretty much accepted that I probably would not get another photo of Trump until next summer then shortly after midnight on December 3 I got a photo of Trump back in his summer area. Believe it or not, I wasnt totally surprised. In the October issue of Deer & Deer Hunting magazine I authored an article titled “Homecoming Bucks” which I believe is one of the two or three best how-to articles I have ever written. In this article I discussed a tendency that I have seen with mature bucks who shift from a summer range to a different fall/winter range. I have noticed that during the very early rut or very late rut when hot does are harder to find, sometimes a mature buck will venture back to his summer range in search of a hot doe. This is something that I have never seen written or talked about yet I have seen multiple mature bucks do it over the years. That is exactly what Trump did. He made a single night time venture back to his summer home in search of a girlfriend.

This in itself is somewhat interesting but it gets a whole lot better. At 5:30 PM the very next evening, approximately 17 hours later, I got Trumps photo on another property … almost 3 miles away! It is the only photo I have of Trump from that location. I am certain that he was again venturing out from his sanctuary (wherever that is) in search of a hot doe. So now I have 2 points on the map, 3 miles apart, to reference in my search for Trump.

There are some more interesting details that I will share. The location where I got the last photo is not a property that I have permission to hunt. I have knocked on a lot of doors in my quest to track down Trump and while I have gained access to some new properties I have also been denied hunting permission several times. When that happens I often try to get permission to just hang a trail camera. I do this because just knowing any new detail when hunting a mature buck can help a hunter finally wrap his tag on that buck. I will also note that Trump has broken off parts of 2 tines since I got his photo back in early October. One more thing, I still do not have a photo of Trump in daylight.

I have logged every photo I have gotten of Trump this year. I note the obvious things like time and location but I also note other details like direction of travel and other bucks that may have been with him. Noting time and direction of travel can help pin-point a bucks bedding location. If a photo was taken right after sunset you can surmise that the buck is traveling away from his bedding location and with photos taken right before sunrise you can assume the buck is headed towards his bedding location. Dates become important in following years as I have long noticed mature bucks will be in the same area on the same dates year after years, give or take a day or two. (I first wrote about this in North American Whitetail magazine in 2003) I must say that typically I just keep notes in my head and save trail camera photos of bucks that I may have an interest in. Trump is the first buck I have ever kept a written log of as many details as possible.

When I started sharing details of my quest for Trump through my blog I stated that this buck was going to be a real challenge and that I would be lucky to even lay eyes on him. I even put my odds of success at no more than 10%. I think that some of you thought I was joking and that I would quickly pull it off. I was completly serious and I still doubt that I ever lay eyes on Trump but I wont stop trying as long as I know he is alive. This is the kind of hunting challenge that I live for. Simply sitting in a tree and shooting the first buck that comes along, even the first really good buck, no longer interests me. Matching wits one-on-one with a mature real-world whitetail buck that has eluded hoards of hunters and survived right under their noses is the ultimate hunting challenge. I know the odds are stacked against me but I wouldnt want it any other way.