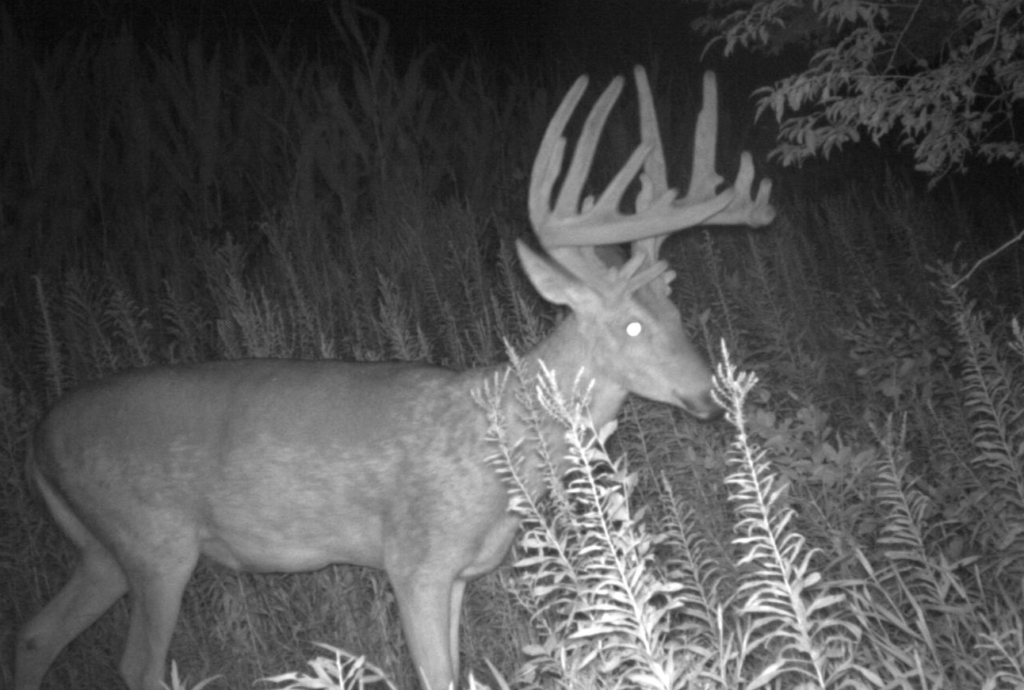 I have been very surprised at how many people have told me they enjoyed following my blog posts last year about a buck I am chasing that I named Trump. It seems like I am always being asked when I am writing my next “Trump blog”. Well to be honest, the reason I haven’t written anything yet this summer is because I didn’t have any new info to share nor did I have a decent trail camera photo.

I normally don’t say much about bucks I am after until I have them on the ground. It just makes more sense to keep ones mouth shut when chasing giant bucks until you have your tag on them. I took a different approach with Trump for a couple of reasons. First I have never thought I had much of a chance to actually kill Trump so I didn’t see much harm in sharing details of the chase as it happens. Secondly, I am very grateful to those deer hunters who have supported my writings, seminars, business ventures and such. If one of them can pick up an idea in these blogs that helps them in their chase for a buck they have their heart set on, then I am all for it.

Trump is still alive and well but has been very camera shy this summer. On the rare occasion when I would get his photo it would be another buck that actually triggered the camera and Trump would be in the background, usually for just a single photo. There is one camera location where I got Trumps photo about once a week last summer but this summer he had completely avoided that spot until August 7th when just like every other photo I have gotten of him this summer he was in the background as another buck triggered the camera. Again, it was just a single photo.

Finally on August 17th I got a few photos of Trump that were close enough and of sufficient quality to get a good idea of how his 2017 rack compares to last year’s version. After reviewing last year’s photos and the few from this year, I would guess that his rack is a few inches bigger. From what I can tell, he has 19 points. I won’t even venture a guess as to what he might score as I have seen photos make giant bucks look much smaller and smaller bucks look much bigger.

When I started chasing Trump I knew the odds were stacked against me but I thought that as time went by and I learned more about him, my chances for success would increase. Also a buck becomes more careless and prone to daylight movement as he reaches a certain age. It is as if they are more confident in their ability to avoid danger and thus start moving more in daylight. They also sometimes shrink their home range as they mature. None of these things have happened with Trump.

It seems like the more I learn about Trump the more clear it becomes that killing him will take a huge dose of luck, certainly more luck than skill. If I had to give myself odds on tagging Trump this season I would say there is a less than 10% chance that I even lay eyes on him, let alone kill him. He is literally the toughest buck I have chased in a long time, maybe ever.

Even though I know my odds of killing Trump are very slim, I won’t walk away from the challenge. For the past several years every buck I have targeted I felt pretty certain I would eventually get a shot at. I can’t remember the last time I put a buck on my “hit list” and didn’t tag him that season. The fact that Trump is challenging me like no other buck has in a long long time is welcoming. Back in my youth I heard veteran deer hunters like my friend Al Foster talk about the chase being more fun than the kill. As I have gotten older I have come to completely understand this.

Trump has in a way taken me back 25 years as a hunter to the time when every mature buck I targeted was a low-odds proposition; when every buck I set my sights on was more likely to get away than fall to one of my arrows. Trump occupies my mind like no other buck has in a long time. He has shown me that no matter how much I know, I still have a whole lot to learn. He has reinforced in me that I will never come close to knowing it all. And he has sent me back to school where I am once again an eager student learning from one of the masters.

I will chase Trump as hard this season as any buck I have ever been after. If he wins, which is very likely, I will tip my hat to him at the end of the season and pray that he survives another year so that we can do it all again. It really doesn’t matter what Trumps antlers end up scoring either. The score will never accurately reflect the respect that I have for him as a survivor. One day the quest for Trump will end and it won’t matter if that end comes via one of my arrows, to another hunter or he simply disappears; either way not having him to chase will be a huge let down.