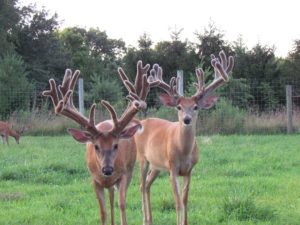 I see it every year, someone posts a trail camera photo of a buck in velvet early in the summer and hunters start throwing out opinions on how much more antler the buck will grow before fall. The common idea is that a bucks antlers will continue to grow until about mid to late August when the antlers will start to harden and soon the velvet will be shed.

When someone gets a photo of a nice buck in early June the assumptions start that since the buck still has a full 2 months of antler growing, surely he will add a whole lot more inches to his rack. It is really not that cut and dried however.

I have owned a captive research herd of whitetails for nearly 25 years and in that time I have watched the annual antler growth of somewhere between 500 and 1000 whitetail bucks. For the record most of my studies focused on nutrition and genetics. In the process I also learned a lot of other information that made me a better deer hunter and simply more knowledgeable about whitetails. I don’t consider myself an expert but instead think of myself as a student of whitetails and continually strive to learn more.

I recall an incident that happened about 30 years ago that still sticks in my mind to this day. One Sunday afternoon in April I noticed a road killed buck near one of my hunting areas. I stopped to look the buck over and marveled at how this buck already had about 6” of new velvet antler growth and very thick bases. Seven days later on the very next Sunday, I saw another buck less than half a mile from where I had observed the road-killed buck the weekend before. This live buck had not even shed his antlers yet from the previous year! Both of these bucks lived in the same area and yet their antler growth cycles were very different in terms of timing.

To help you visualize the differences in individual bucks antler growth cycle I photographed some bucks in my research herd today. As you look at these photos keep in mind that these bucks are all the same age and living together in the same pen eating the same feed. 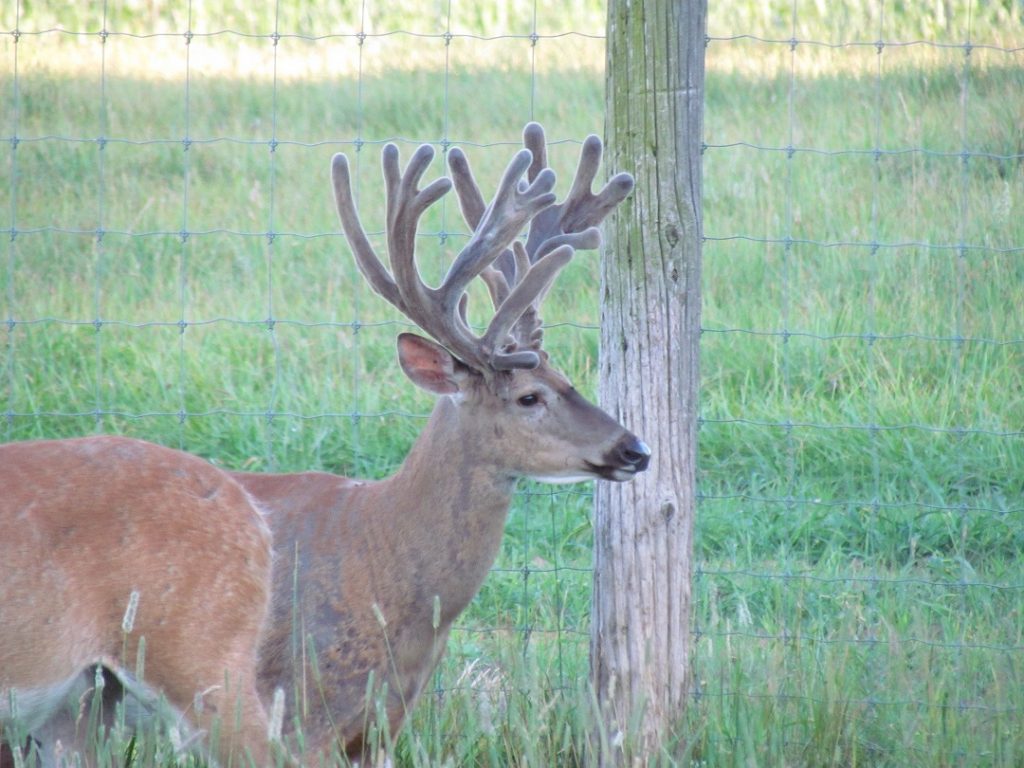 This first buck is clearly an “early grower”. Notice how the shape of his rack is complete and he has already sprouted all of the tines he will have. His tines are also slowly starting to come to a point. This buck will put on minimal growth from this point on and will be done growing in terms of adding inches before the first day of August. 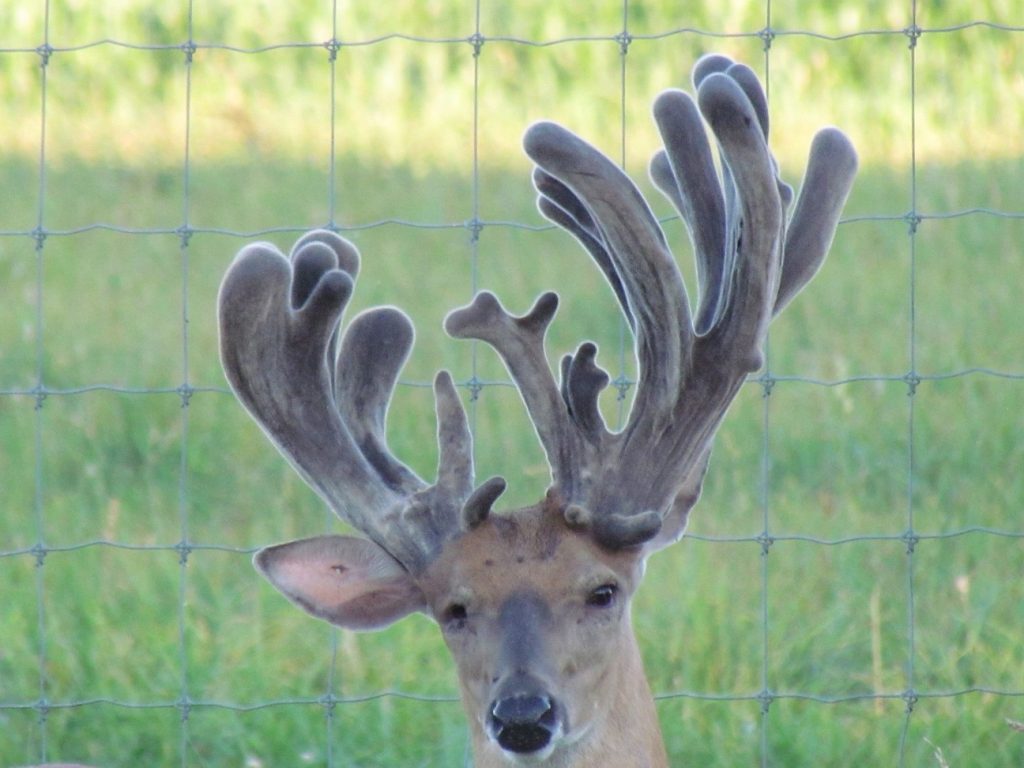 Even though this buck is very non-typical he is more of an “average” buck in terms of where he is at in the antler growth cycle for this time of year. Like most bucks in early July his tines are still very much rounded and bulbed on the ends. He will put on several more inches of antler in July and probably still grow a few more inches in August. He will also likely sprout some more points that are not yet showing. 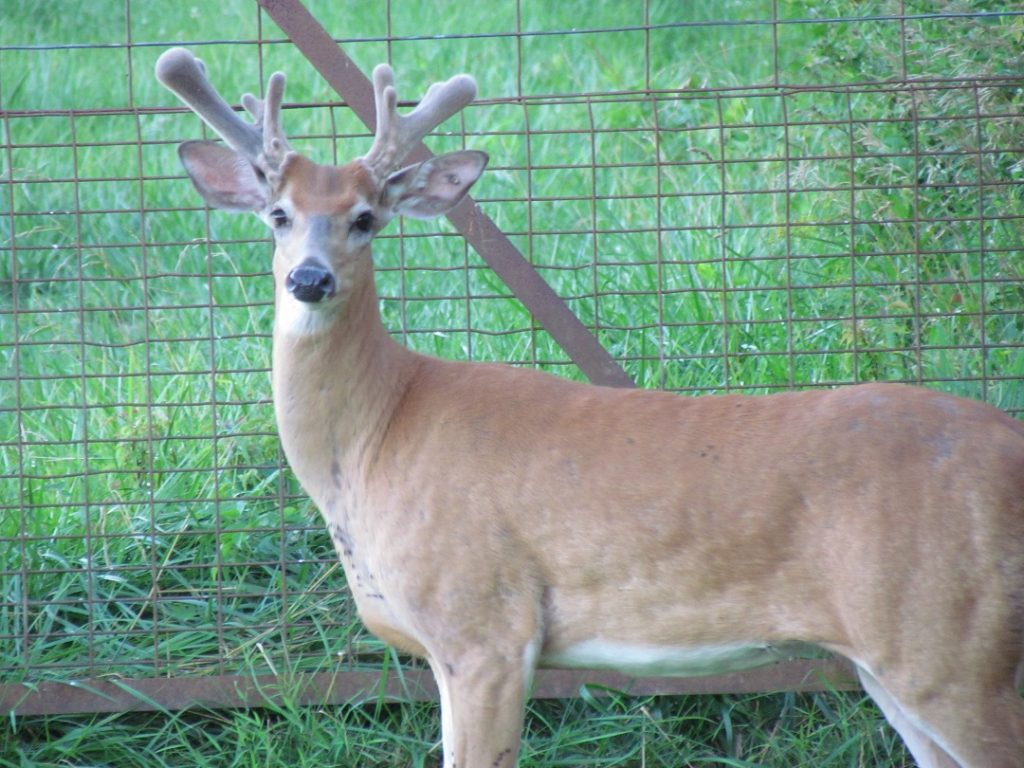 This last buck is clearly a “late grower”. He is just starting to fork off at his G-2 tines while most other bucks are well past this stage of growth by this time of year. It would be easy to dismiss this buck as nothing special but I have seen these late growers put on a phenomenal amount of antler in August. Believe it or not this buck could possibly outscore the other two by the time they shed velvet.

First of all, this information is a perfect example of how different individual bucks can be. While there are general tendencies with whitetail bucks that we can look at to “expect” certain things from them, they are also uniquely individual and some individuals will fall well outside of the parameters that we would typically consider “normal”. While the topic here is the antler growth cycle, those individual traits and tendencies spill over into many other areas as well. When I started realizing that the bucks I was hunting are uniquely individual and looking to expose those individual tendencies, my hunting success took a turn for the better.

The fact that different bucks have different antler growth time frames does affect me as a deer hunter in one way; it causes me to not put out my trail cameras until right before and primarily after July 1. Getting photos of some mature bucks can be about as tricky as killing them. Often we get one chance to get it right at a location before the buck is on to us and shifting his movements accordingly. We know that the best time to kill a buck is the first time we hunt a stand and this also relates to trail camera sites as well. The best time to get a bucks photo is when you first put out your camera at a certain location before he has had time to figure out what is going on.

By early July any photos I get of a mature buck will typically show enough antler for me to recognize the individual and get an idea of how his rack might finish out for the year. If I were to put cameras out in early June and then get the only photo of the summer of a particular buck I may not have any idea how he will finish if he is a late grower. Thus I time the placement of trail cameras just as I time my hunts to throw the odds in my favor that when I do get a bucks photo, he will be far enough along in antler growth that I can recognize him. I don’t want to burn out my camera sites any more than I do my stand sites.